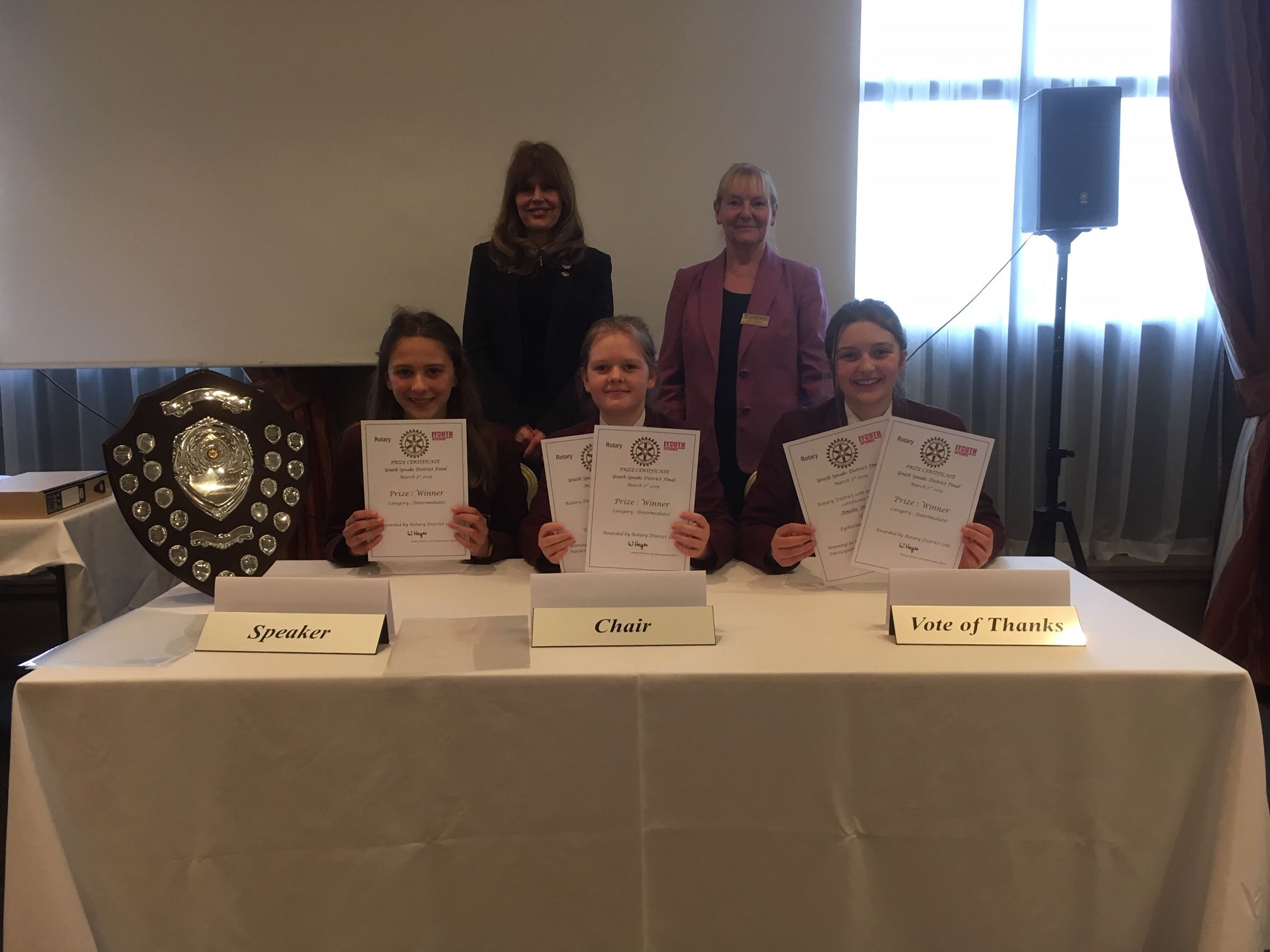 One morning in early spring – well, one very early Sunday morning in spring, Tytherington’s Rotary Club Youth Speak team headed off down the motorway to sunny Frodsham (actually, it was pouring with rain) for the District Final of the Rotary Youth Speak competition at the Forest Hills Hotel. As so many teams had entered the competition this year, the Rotary Club had to run two separate events for Intermediate and Senior teams, which was why competitors, teachers and parents had to forgo their Sunday lie in to arrive promptly at 8.30 am for a 9.15 start.

As mentioned before, there were a large number of teams in the Intermediate section this year. Our team was competing against other District Heat winners from all over Cheshire and areas of the North West, including Wilmslow High School, Culcheth, Hope Academy and Bolton School for Girls. Topics included Performance Enhancing Drugs in Sport, Role Models in Literature and the intriguing “Teaching Fish How to Climb Trees”. Out team’s topic was “Should 16 year Old be Eligible for the Vote”?

On the day, the event was extremely busy, and well attended and supported by parents and teachers. The standard of competition was extremely high, and this was alluded to by Adjudicator, who commented on how privileged we all were to witness such articulate and mature presentations.

Our team, which comprised of Esther Bird, Anna Wilke and Amelie Mayou, had worked effortlessly in the two weeks since the heat to fine tune and improve their presentation. The standard on the day was extremely high, in fact the Rotary Regional Organiser, Warren Heyes that this was the highest standard they had ever had in an Intermediate competition. So, imagine our delight when the winning team was announced – Tytherington School! The head judge said that the decision had been unanimous. Not only this, but Esther was awarded Best Speaker in the face of extremely stiff competition. A great achievement – well done, Esther. All three girls did amazingly well, and thoroughly deserve to go through to the Regional Final on March 23rd in Wrexham.

Everyone present complimented our team on the quality of their presentation. The judges commented on their “enthusiasm” and how “well informed“ they were. Mrs Burke said “I am absolutely delighted for the team – they were great. Anna was a most professional and polished chairperson, Esther spoke with passion and eloquence, and Amelie was a gracious and engaging vote of thanks. They certainly did themselves and Tytherington proud”.

Thanks to the girls’ parents for their support, and for giving up their Sunday to support the staff and students. But most of all, well done to the team. We look forward to competing in the regional Finals in three weeks’ time.