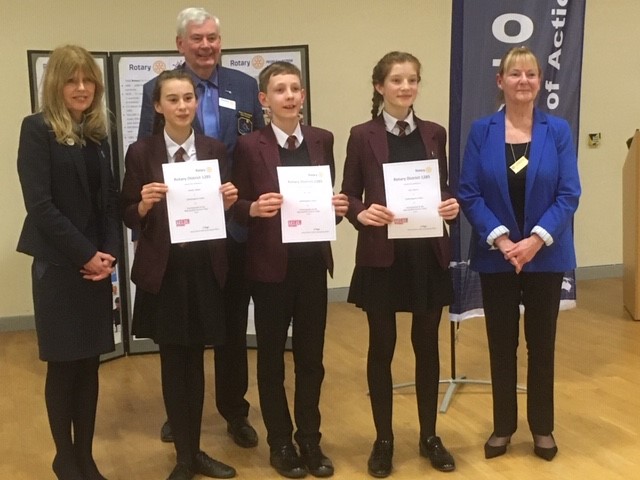 On Tuesday, 28th January, Tytherington School once again took part in the Rotary Club Youth Speak competition, as three excellent and hardworking teams took to the floor at Macclesfield Academy to follow in the footsteps of last year’s National Champions. Not an easy act to follow

This is the first time Tytherington has had three teams in the competition, in past years we have had only one team take part. This year, however, Tytherington entered three teams, one Senior team and two Intermediate teams.

The evening began with performances from Intermediate teams from All Hallows, Knutsford Academy and Tytherington School.

The Senior team included Alice Langston, Emily Paton and Morgan-Leigh Howard, and these students gave their speech on the subject “Why Scoliosis Screening Should be introduced into Schools.” Morgan herself has suffered with this condition, and spoke very eloquently and passionately about the subject. Emily showed poise and control in her role as Chairperson, and Alice was also excellent as a thoughtful and reflective Vote of Thanks.

This year, we had two intermediate teams, and we were particularly delighted to have some boys taking part in the competition for the first time. The first team comprised of Iolo Foat, Amelie Aldous and Lily Ventris, all in Year 8 , who spoke on the topic of “Gender Inequality in Sport:  Give Us a Sporting Chance”. All three team members gave an excellent performance: Iolo was  polite and engaging chairperson, and Amelie spoke with enthusiasm and confidence on a topic she feels strongly about. Lily was both convincing and fulfilled the role of Vote of thanks with polish.

The second Intermediate team was included Bella D’Arcy, Mr Ali and Rosalynn Stainforth and was our first mixed year team! Rosalynn was out youngest contributor and did a great job as chairperson, and Bella was impassioned, convincing and entertaining in her speech. Mir’s speech as Vote of Thanks was mature and well expressed. The topic chosen by this team was “Autism – not Alien”.

Our teams performed in second, fifth and sixth positons. The atmosphere was tense, with all three teams nervous but excited about the competition. All three teams spoke with confidence and polish. When all the teams had performed and the judges had deliberated, cogitated and digested and everyone had been refreshed with beverage and biscuits, we sat to down to listen to the judges’ results .

Imagine our surprise – and delight-  to discover that our teams had come first in the Seniors, and First and Runners Up in the Intermediate category!

A fantastic result – and well done to all nine participants. A clean sweep. You have done Tytherington proud!